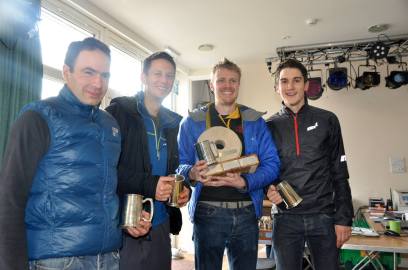 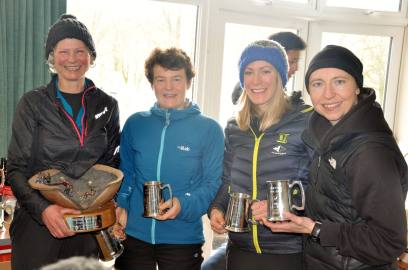 After last year’s snow enforced sabbatical it was great to be back in Edale Village Hall on the first Friday in March. The atmosphere pre-High Peak Marathon is quite special as the teams contemplate the task ahead of them. This year that task seemed to include walking on water and although the rain had stopped just before the start, the bogs were full of liquid and ready to swallow something more solid. Fell runners have a love/hate relationship with flagstones, but I think most were glad that the Brown Knoll section now has a hard surface. It was good to be back to the original watershed route staying on the higher ground across Cartledge Flat which was last run in 2003. This section has some flagstones but plenty of boggy ground too. Ground conditions did not phase our first ladies team ‘3 Blind Mice and a Farmer’s Wife’ as they set a new women’s record of 9:32, nearly 10 minutes faster than that set in the frozen conditions enjoyed in 2013.
First to finish this year were ‘Long Distance Mud Affair’- a crack team of fell-running winners and record breakers. Jim Mann fresh (?) from completing all three big rounds this winter was still going well, whilst his OMM 2016 partner Nic Barber provided local knowledge (albeit he was the only member of the team not to have raced HPM before). Adam Perry is no stranger to the delights of HPM whilst last minute replacement Shane Ohly was reminded how tough HPM can be.
‘Flipper’s Gang’ without Flipper (Steve Watts) himself, finished in second place but were fast enough to win the veterans trophy almost before applying the handicap to their time. Spyke therefore continued to add to his substantial HPM tankard collection.
The two Steve’s were also presented with a special prize that Martin Stone had promised for any team that could beat the long-standing record of 8:07 his team set in 1988. In 2013 Flipper, Spyke, Matt Giles and Simon Harding broke it by 15 minutes. The delay in presentation was in waiting for the appropriate ‘High Peak’ liquor to become available.
Oh, and if you’re wondering what happened to the other pre-race favourites ‘Haggis on Tour’ from Carnethy- it was bad luck again as late replacement Alex McVey turned his ankle before the second checkpoint.
There were many heroic performances but special mention must go to Kev Saville who found himself on a team renamed in his honour ‘Children of the Kev-olution’. It had transformed from the usual bunch of Dark Peak veterans to include his son Tom and two other young guns – not one of whom was older than Kev’s balaclava! They finished in 5th place (9:36)- well done lads and Dad.

Last but not least there is a story behind our final finishing team ‘The Firty Darters’. Caroline (Puss) Taylor and husband Ed together with her brother Mark and second cousin James were all competing in memory of their father Anthony Taylor (Tony) who took part in the very first HPM but did not finish. Caroline and friends took the team name and made sure it appeared in the list of finishers 45 years later.  Well done to them, Dad would be proud.

Before signing off I should like to thank on all our behalf the tremendous effort the students of University of Sheffield Mountaineering Club put into the event.  Particularly this year’s co-ordinators Olga and Nabil, the catering team, drivers and all those who manned checkpoints. The weather was truly foul on Friday as the trudged out to their allotted positions but come the event they did a great job and runners enjoyed their enthusiasm and their fancy dress (the swans of Swain’s Head voted winners in that competition).

Well done to all our finishers, hopefully we’ll see many of you in 2018 (luck in the lottery permitting)